Wilhelmshaven, 19 February 2021 | NORDFROST is expanding its NORDFROST seaport terminal in the container port of Wilhelmshaven as a food hub. The current construction includes a deep-freeze high-bay warehouse and a spacious food hygiene area. The hygiene area has now been completed and put into operation after official inspection and approval.

The NORDFROST seaport terminal currently offers customers a storage capacity of 105 000 pallet spaces, which is divided into the temperature ranges frozen, fresh and dry. The fresh products terminal was the first to go into operation in July 2012 – shortly before the official opening of the container port. The drying halls for all types of merchandise in the northern building complex were opened in September 2018. The deep-freeze store began storing the first pallet in January 2018. This also brought the first hygiene area into operation, a so-called white area for processing food. Since then, products have been packaged here according to customer specifications, such as freshly delivered meat products, boxed and then shock-frozen and temporarily stored – services that NORDFROST also offers at other locations nationwide.

The newly built, second hygiene area at the southern end of the building complex has now started operations. This is located in front of the high-bay warehouse and has a multifunctional hall and four separate production halls, each with an area of ​​10m x 60m plus ancillary rooms. Depending on customer requirements, NORDFROST is now equipping the individual areas with automatic systems, for example for contract filling of chilled and uncooled food in a wide variety of packaging types and formats with individual decors (bags, folding boxes, vacuum, cardboard, etc.) A multihead weigher with a connected tubular bag system is already in operation. With that, frozen items from large containers are filled into smaller consumption units for the respective national markets. Available for customers are now around 5 000 m² of white space for outsourcing process steps directly in the port. The work in production and warehouse is at the highest quality level, certified according to IFS Food and IFS Logistics, each at a higher level, as well as according to organic quality standards. In the subsequent container stowage, there is no weight limit for transport in the port if the logistician sends the goods on the sea voyage via the neighboring Container Terminal Wilhelmshaven. The official clearance as well as the organization and implementation of the entire supply chain including combined transport are in his hands.

The new administration building for the administration of the terminal was also ready at the beginning of the year. In October of this year, the high-bay warehouse for further 40 000 frozen pallet spaces with automatic loading and unloading of trucks will finally go into operation. The family company has thus invested in the port’s logistics zone around EUR 200 million in the NORDFROST seaport terminal. Shippers in the food industry and other industries are enthusiastic and receive all services here. Germany’s only deep-water container terminal also has the best nautical conditions and a unique hinterland connection.

NORDFROST, headquartered in Schortens near Wilhelmshaven, is Germany’s leading frozen food logistics company. The family-run company, founded by Horst Bartels in 1975, has a turnover of around 450 million euros (2020), 3 000 employees and 40 deep-freeze storage locations in Germany with a current capacity of 900,000 pallet spaces. These form the basis of a nationwide groupage network for the fine distribution of frozen goods. NORDFROST dispatches 1,600 trucks every day. These are used throughout Germany and Europe, including the distribution of groupage loads in all European country markets in which the logistician works with strategic partners. Highest quality awareness, IT competence and sustainability are the hallmarks of NORDFROST, which is expanding. 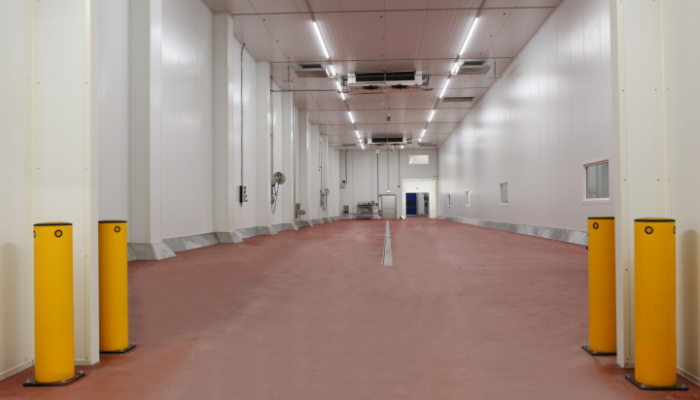 One of four recently completed hygiene rooms with an area of ​​10 m x 60 m, in future equipped by NORDFROST as required with automatic production systems for customers from the food industry. The hygiene sluice can be seen in the background. The NORDFROST seaport terminal now offers a total of 5 000 m² of white space.