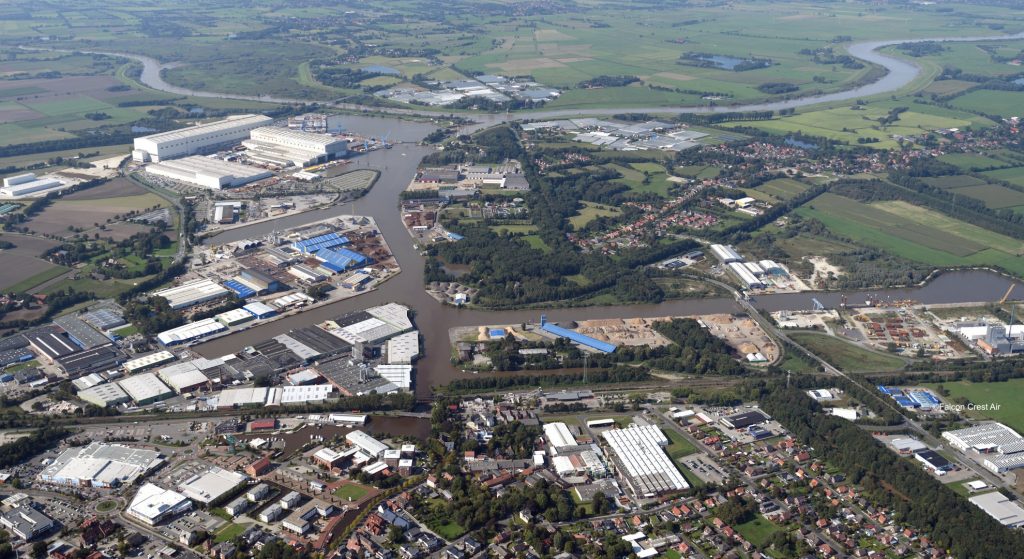 The seaport and inland port of Papenburg is undisputedly one of the most important transhipment points on the Ems. It is the southernmost German seaport and is located about 60.5 sq m from the North Sea. The port lies directly on the federal waterway

In addition to the port connection, the high-tech location of Papenburg has very good hinterland connections. The direct connection to the A31 motorway (North Sea - Ruhr area) and the directly adjacent A28 (Oldenburg - Bremen) and A7 (NL) motorways offer local businesses and companies looking to relocate optimal opportunities for their logistics chain. In addition, the B70 and B401 federal roads can be reached directly in the vicinity of the port. This network is supplemented by the Münster-Norddeich interregional line of the German Federal Railway and the Emsland freight transport centre. Papenburg is also quickly connected to the international air transport network via the Leer-Papenburg regional airport.

The sea and inland port in Papenburg is run as a municipal port. The port, which is tide-independent due to the sea lock, is accessible for sea-going vessels with a maximum draught of 5.50m, a length of 145m and a width of 24m. The shipyard harbour is accessible for ships with a maximum draught of 8.50m, 330m length and 43m width. The port is divided into seven port sections. Cargo handling is carried out by five private, resident companies. Public quays are available for everyone to use at various points in the harbour. Registration is done through the harbour office of the municipality.

The Port of Papenburg mainly handles bulk cargo such as gravel, peat and wood. In addition, steel and various machine parts are handled in larger tonnages. In addition, typical goods handled in the municipal port include, for example, chippings, gravel, slag, iron, fertiliser, plastic, coal, animal feed or grain. A total of approx. 1 million tonnes are handled in Papenburg every year.

An elementary key figure is the employment effect resulting from the activities in the port of Papenburg. In 2015, the districts of Emsland and Leer commissioned the Lower Saxony Institute for Economic Research (NIW) to conduct a new analysis of the regional economic effects of Meyer Werft in the Emsland/Leer region. In 2019, the figure determined was extrapolated. The direct employment effects derived from the production effect of the economic activity of Meyer Werft in Papenburg according to regions and impact levels, including tourism effects, is estimated at around 23,475 employees. If one adds to this all the other entrepreneurial activities that are carried out at the location beyond the shipyard, one realises the enormous importance of this economic power at the location. Economic Development Manager Sabrina Wendt is right to say: "The port is the heart of Papenburg's economy. It is therefore one of the elementary tasks to maintain the existence and function of the sea and inland port of Papenburg by means of intelligent solutions and to constantly develop it further".

It is therefore no coincidence that the city of Papenburg invests in the port every year. This mammoth task can only be financed jointly by the state and private companies providing additional financial support to the city administration.

In 2019, the city of Papenburg upgraded part of its track facilities in the area of Industriegebiet Süd. The tracks are connected to the DB Netz AG line 2931, Hamm - Emden, via switch 3 at Papenburg (Ems) station. A total of approx. 700,000 EUR was invested in the upgrading of the track systems.

As the operator of the sea lock, the city of Papenburg feels responsible for offering safe lock operation for the port residents so that nothing stands in the way of the development of the companies and the securing of the associated jobs. The administration is in regular talks with the companies, for example, in order to optimally coordinate the closure times currently necessary for the implementation of the construction measures with the operational concerns. The effects of the Corona crisis do not stop at Papenburg. Nevertheless, Mayor Gattung is confident - for example with regard to the planned port expansion in Bokeler Bogen. Here many companies are sticking to their settlement plans "and are thinking far beyond the day despite the crisis". The city administration has started talks with interested companies about the 65 hectares of land to be marketed. In addition, the administration is also taking a closer look at the areas around Nordhafen. Here, too, there are extensive areas owned by the city of Papenburg that need to be developed.

Economic Development Manager Wendt says: "Our goal is to constantly develop Papenburg as a city for all generations, which also includes the infrastructure around commercial and industrial areas, which of course also includes the port areas. So that a home for business and life with all-round versatile offers is available."