"Nordlicht II" arrives at the home port of Emden

Emden, den 14th November 2021 | The new catamaran MS “Nordlicht II” of Emder AG “EMS” has arrived at the home port of Emden after its voyage across the world’s oceans. Many onlookers were eagerly awaiting the ship as it passed the Great Sea Lock and finally moored at the south quay. After that, there were a few official inspections to finally approve the ship before unloading began today.

The transport ship MS “PAULA” from SAL Heavy Lift GmbH was piggybacking the MS “Nordlicht II” from Singapore for around three and a half weeks. Now the final equipping on board still has to be done, such as the catering equipment with crockery and cutlery or the cash register system as well as the final touches on the on-board information system. Most important, however, are the test drives for the crews, who first have to familiarize themselves with the completely new technology on board, and mooring maneuvers are also on the program. “The time frame is sporty,” explains Claus Hirsch, technical inspector and authorized signatory of the “EMS” AG, because the ship’s christening is scheduled for the 26th November 2021. The first missions from Emden to Borkum and also from Cuxhaven to Helgoland are also planned for this year.

The construction contract for the high-speed ship was awarded to the Penguin shipyard in Singapore following an international tender. The ship was then mainly built at the Penguin shipyard in Batam / Indonesia. It was then transferred to Singapore for final equipment and test drives. For the Penguin shipyard it is a showpiece, as it not only impresses with its shape and technology, but also with its exclusive furnishings. Many of the materials used are supplies from Europe or Germany, such as the MAN engines or the carpeting designed for the group of companies from the Netherlands. In some places in the ship you can already find references to the planned area of ​​operation “Wadden Sea” or the tradition of the shipping company in Heligoland traffic, which is illustrated in the form of murals.

On board there are a total of 450 seats available in three saloon areas on two decks, which are equipped with very comfortable seats from West Mekan from Norway. On the main deck and on the upper deck there are 354 seats in the “Comfort Class” and in the front area of ​​the upper deck there are a further 96 seats in the “Captains Class”. All seating groups that are not directly next to the window are face-to-face with spacious tables fitted. In the “Captains Class”, service at the seat is to be offered in the future, but gastronomic services are also available in all other areas. There are also 54 seats and tables on the open sundeck.

On board, prototypes of an energy-saving and highly efficient engine type from MAN, namely the type 175 D, are used. These are operated with the innovative synthetic fuel GTL (gas-to-liquids), which is obtained from natural gas. GTL burns cleaner and reduces local emissions. The high-speed ship achieves an engine output of 2 x 2,960 kW and is comparatively fast with a top speed of 34 knots. And if the sea does get a little choppy, an effective motion damping system ensures wave stabilization.

According to the timetable, MS “Nordlicht II” will be deployed in Borkum traffic from Emden this year and complements the fleet, especially the MS “Nordlicht I”. It is also used in Heligoland traffic on the route from Cuxhaven and shortens the connection from the mainland to the offshore island to just 75 minutes. 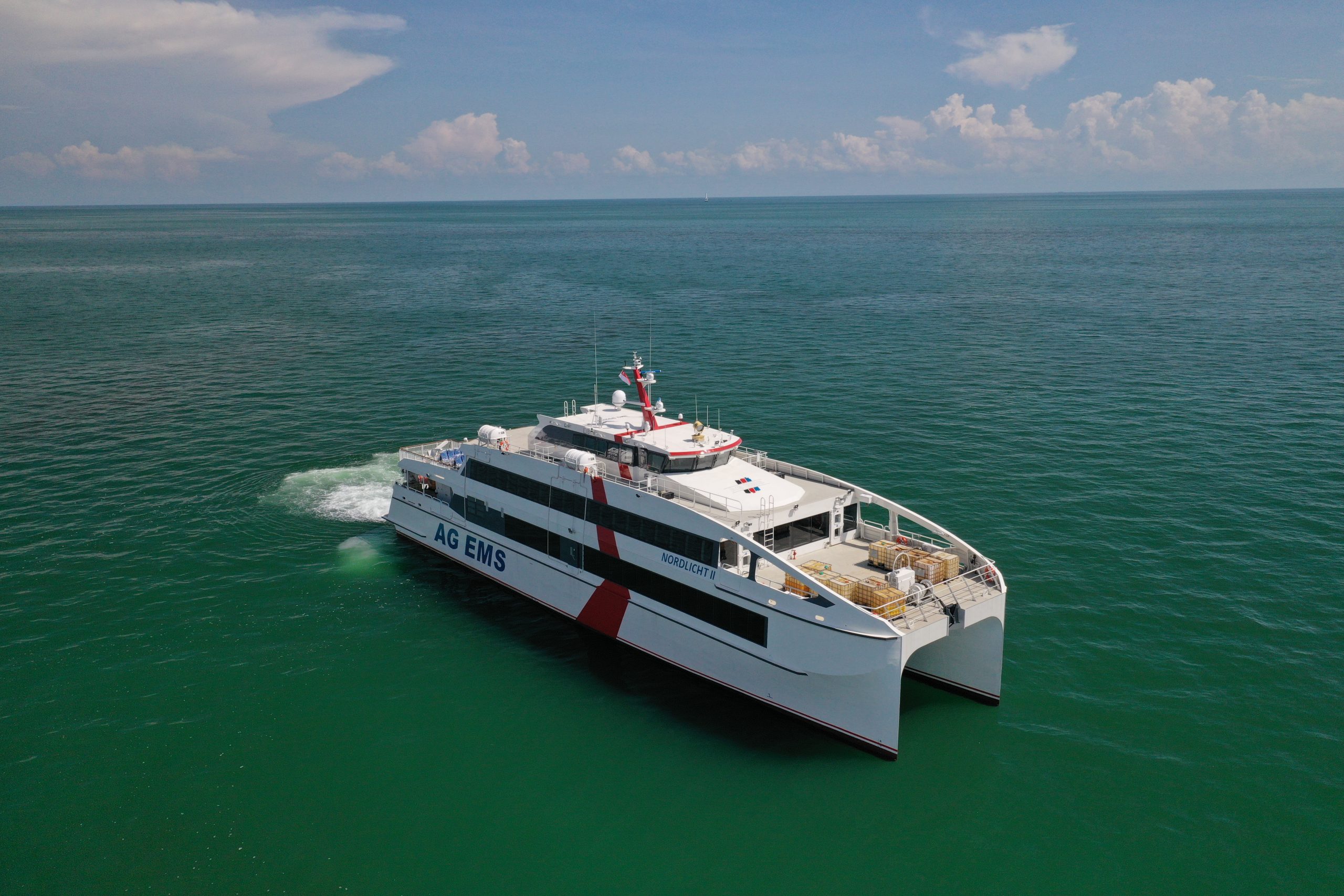